ValuNet is working towards north Prairie St from 15th Avenue all the way to the I-35 bypass. There is a lot of work involved in getting fiber to every neighborhood. Fiber fast internet and crystal clear HDTV will be available in this are around the end of the year. What a great Christmas present! See the interactive map to look at the new area. Please click on the image below to see enlarged coverage map. 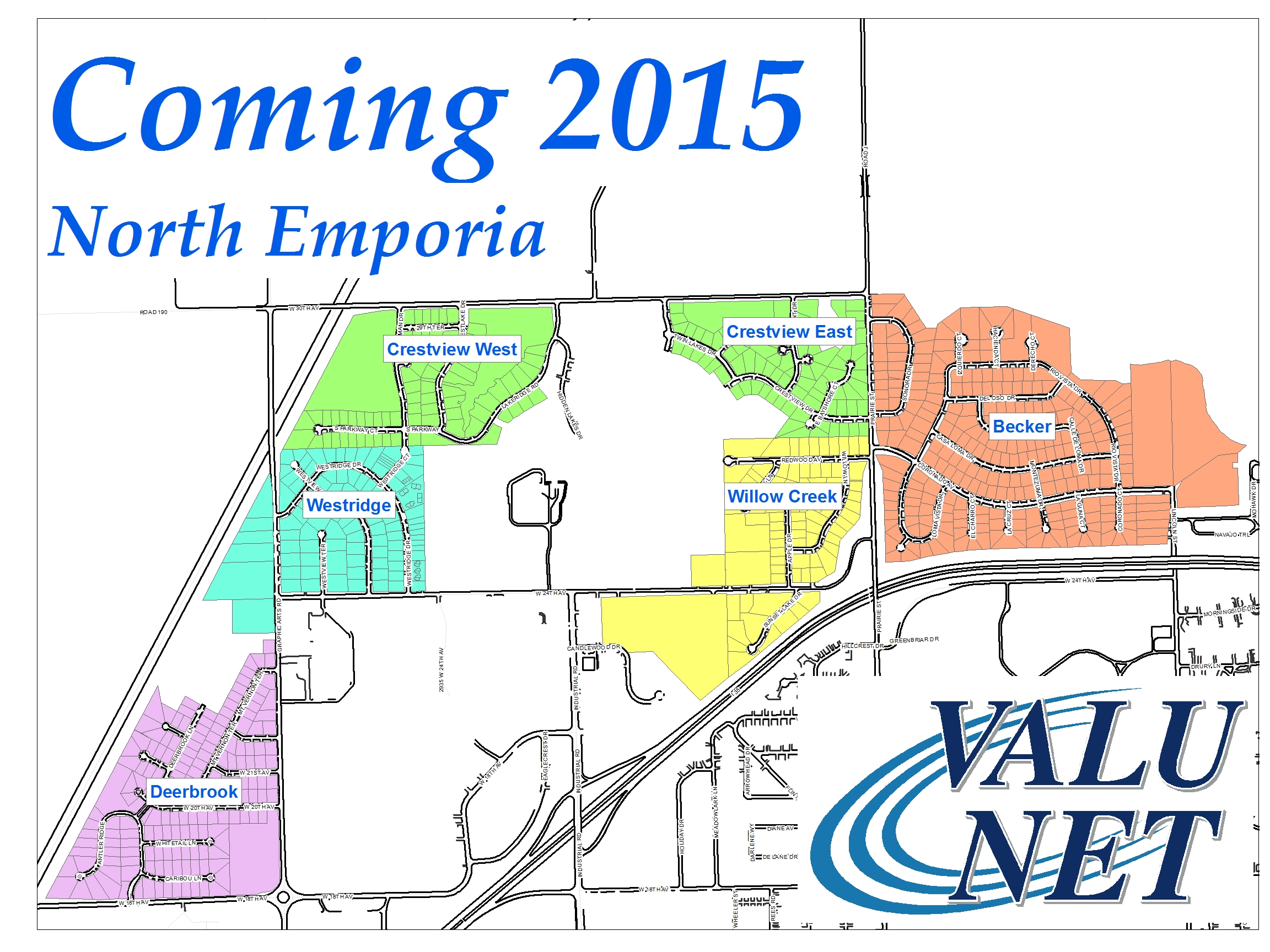 ValuNet is working towards north Prairie St from 15th Avenue all the way to the I-35 bypass. There is a lot of work involved in getting our fiber pulled into these areas and building our network. Fiber fast internet and crystal clear HDTV will be available in this are around the end of the year. What a great Christmas present! See the interactive map to look at the new area. 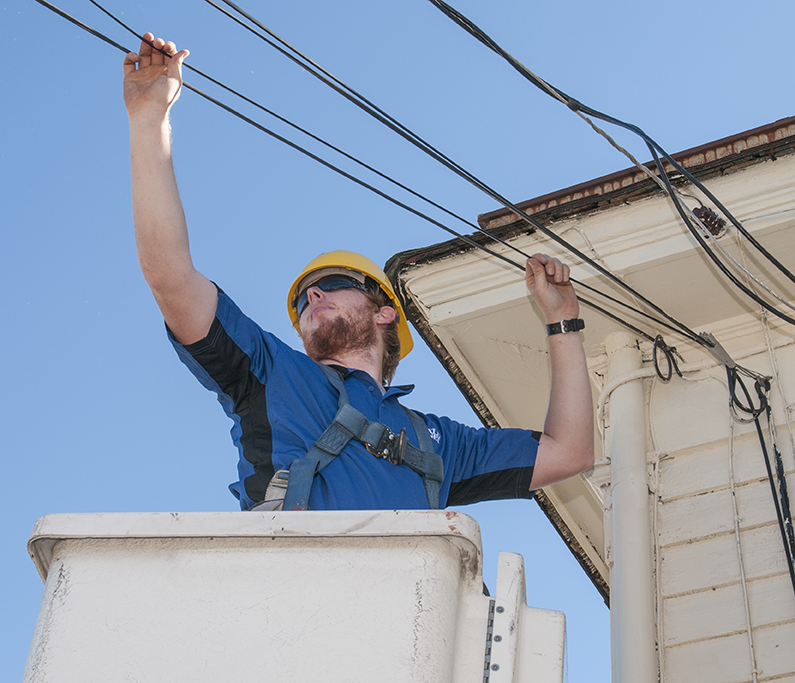 Fiber to the home (FTTH) is the delivery of a communications signal over optical fiber from the operator’s switching equipment all the way to a home or business, thereby replacing existing copper infrastructure such as telephone wires and coaxial cable. Fiber to the home is a relatively new and fast growing method of providing vastly higher bandwidth to consumers and businesses, and thereby enabling more robust video, internet and voice services.

Connecting homes directly to fiber optic cable enables enormous improvements in the bandwidth that can be provided to consumers. Current fiber optic technology can provide two-way transmission speeds of up to 1000 megabits per second. Further, as cable modem and DSL providers are struggling to squeeze increments of higher bandwidth out of their technologies, ongoing improvements in fiber optic equipment are constantly increasing available bandwidth without having to change the fiber. That’s why fiber networks are said to be “future proof.”

If you are experiencing brief degradation or loss of TV signal for a few minutes in the evening, the explanation below from Wikipedia may help you understand what is going on. This phenomenon affects all TV providers due to the fact that most television programming is distributed via satellite to transmit their signal at some point. According to the forecasts, sun fade may occur from October 4th to October 9th.

A sun outage, sun transit or sun fade is an interruption in or distortion of geostationary satellite signals caused by interference from solar radiation. The effect is due to the sun’s radiation overwhelming the satellite signal.

In the northern hemisphere, sun outages occur before the March equinox (February, March) and after the September equinox (September and October), and in the southern hemisphere the outages occur after the March equinox and before the September equinox. At these times, the apparent path of the sun across the sky takes it directly behind the line of sight between an earth station and a satellite. The sun radiates strongly across the entire spectrum, including the microwave frequencies used to communicate with satellites (C-band, Ku band, and Ka band), so the sun swamps the signal from the satellite. The effects of a sun outage range from partial degradation (increase in the error rate) to total destruction of the signal. The effect sweeps from north to south from approximately 20 February to 20 April, and from south to north from approximately 20 August to 20 October, affecting any specific location for less than 12 minutes a day for a few consecutive days. 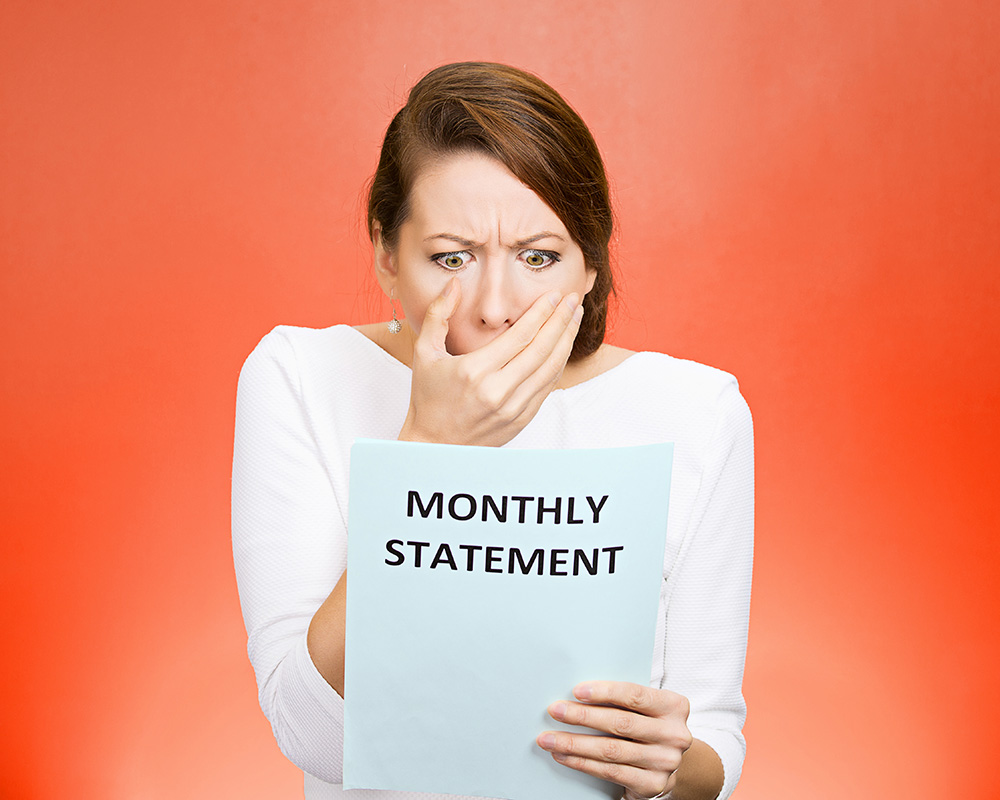 Go to tvonmyside.com to learn more

ValuNet has opened new territory! We are now able to service the west side of Sunnyslope to the east side of Thompson between 9th and 15th streets. This area includes Sunnyslope, Woodland, Prairie St, Prairie Park Lane, Park Avenue, Beverly Street, Gloria Street and portions of 9th, 12th and 15th Avenues.

We are building from the west side of Thompson St out to the fairgrounds from 7th street to 12th street and from the west side of Thompson to the east side of Frontier Way from 12th street to 15th street. Streets included in this area are Thompson, Luther, Henry, Burns, Oakwood Dr, Mava, Sean, Patrick, Tomahawk, Trail Ridge, Magic Circle, and Sherbrooke. This area should be ready around the late October/early November time frame.
After completion of that section, ValuNet will be headed up Prairie from 15th to the bypass at 24th. This new area will include all residences from Jones Park west to Holiday Dr. This area includes Meadowlark Lane, Diane, Delane, Arrowhead, Flint, Maplecrest, Rees Rd, Prairie, Thompson, Luther, Greenbriar, Schaeffer Way and portions of 18th, 20th, 21st, 22nd, 23rd and 24th Avenues. See our map for specific locations. This area is scheduled to be complete by February 1st, 2015 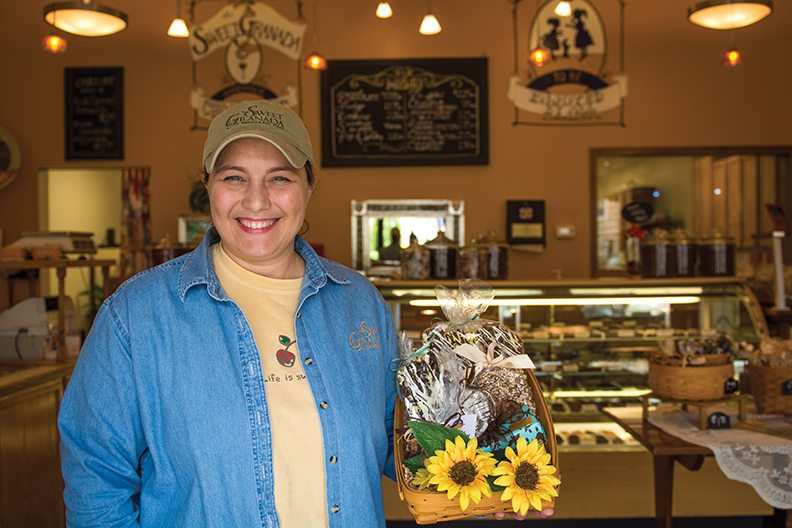 De Ricker, manager of Horizon Plaza, a senior living facility, loves the fact she gets to use ValuNet at work. Unfortunately, she lives so far out in the country, she said, the fiber optic telecommunications company probably won’t ever get to her home where she’d love to have the speedy technology and excellent service that ValuNet offers.
“It’s faster than what we had, which was AT&T for internet, and I like that all of the staff works exceptionally well with the demographics of my building,” Ricker said of her business experience with the company. “Not everyone knows how to deal with the senior community, and their staff is excellent and very respectful. They take their time explaining things.”

In addition, being locally owned was a big plus when Ricker asked ValuNet to work with her on offering packages to the people in her building, many of whom live on low incomes. Company officials came up with a special package for the 100 residents in her building, she said.

Being responsive to business is a big ValuNet plus for Kim Redeker, owner of Sweet Granada. She switched her business to ValuNet in October, using AT&T, internet and a landline telephone, but also putting the business alarm system with them as well.

“One of my first motivators for considering ValuNet was the fact that they’re local,” Redeker said. “Being a small, locally owned business, it was important to me to use what local options I had. The nice bonus to that was finding that I had a local option that was just as cost-effective, with much better service than what I was using.”
Redeker was able to expand the number of lines she had with ValuNet – and still be within her budget on her monthly bill – and add telephone lines. Within weeks, she saw the impact that had on sales.

“We’re able to increase our sales capabilities and so we were able to take more phone calls and therefore take more orders through our key holiday season,” she explained. “So our ValuNet landlines actually helped us make more money.”

The new alarm system set up by ValuNet is protecting Sweet Granada in more ways than one. Last year, Sweet Granada suffered a significant setback when the store’s air conditioning system failed and, as a result, the company lost $10,000 in products, she said. They got it fixed, were assured by the landlord they had then that it would be fine, stocked back up and it happened again. 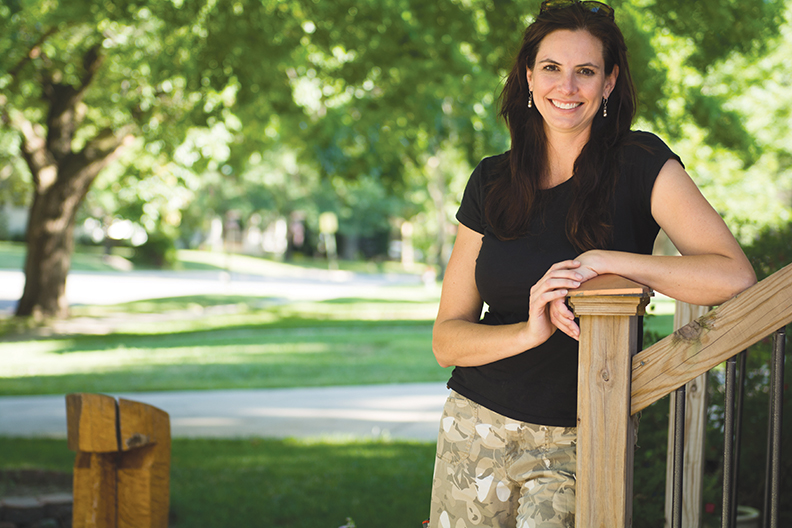 “It was a huge hit to us last August,” Redeker said. “I went to ValuNet and asked if there was anything I can do to avoid this happening in my new space. They came back to me with this alarm system. It can tie into your phone line and it will tell you if your electricity goes out or if you temperature goes above or below a certain level.”
That kind of peace of mind helps business owners sleep better at night and is an example of ValuNet pushing hard to meet customer needs. For Deb Crowl, the busy administrator of Emporia Child Care, she is thrilled the company meets one of her most basic wishes.

“I love the speed of our fiber Internet,” she said. “We’ve had it at the center for over a year. I feel more productive.”
In addition to a super-fast internet connection and the consistency of the service, Crowl said she has gotten quick answers every time she’s had to call support. And each question, she admitted, was about something she was doing wrong and not a problem with the service.

“Whoever answers the phone can usually answer my question,” Crowl said. “To me that’s very impressive. I’m not moved from person to person and put on hold.”
Along with using internet and telephone services through ValuNet at work, Crowl said she’s a satisfied customer at home too. “I absolutely love it,” she said. “I have the TV and everything. I was just telling someone about it yesterday. I got it in March in time for the March Madness. I’m a big basketball fan. It’s true HD. I felt like I could reach out and pat those guys on the back. It’s awesome.”
Heather Russell is also a customer at her home, where her family particularly enjoys the fact that they can stream movies at fast speeds on ValuNet.
“We were set up with another company,” Russell said. “We were always having trouble with our internet connection. Their customer service was horrible. We wanted to support local companies, so we switched.

“ValuNet’s customer service is phenomenal, and our internet speed is way faster now than what we had,” Russell said. “And it costs us less every month.”

If you live on Rural, West, Washington, Walnut, Lawrence, Chestnut, Oak or Elm between 6th St. and 12th St, service is now available!!!

Emporia High Speed Internet Services are now available. ValuNet provides High Speed Internet services for Emporia, KS. ValuNet, is an all-fiber telecommunications network locally owned and operated in Emporia, KS. ValuNet provides internet, local and long distance services for residential and businesses. No Contracts, no installation fees, no data caps. We provide superior services at competitive prices. Unlike traditional means of transmitting data, ValuNet’s fiber network allows more reliable high-speed data transmissions through a single fiber. ValuNet is owned locally and the staff is made up of all Emporians with years of experience in the business. 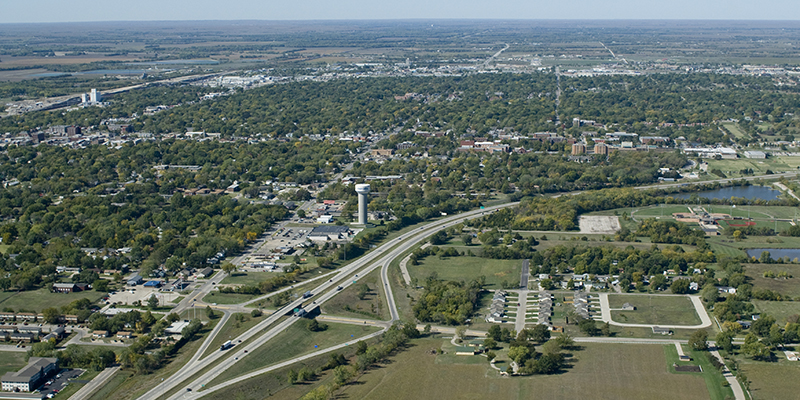 Emporia Satelite Services are now available. ValuNet provides Satelite services for Emporia, KS. ValuNet, is an all-fiber telecommunications network locally owned and operated in Emporia, KS. ValuNet provides internet, local and long distance services for residential and businesses. No Contracts, no installation fees, no data caps. We provide superior services at competitive prices. Unlike traditional means of transmitting data, ValuNet’s fiber network allows more reliable high-speed data transmissions through a single fiber. ValuNet is owned locally and the staff is made up of all Emporians with years of experience in the business.